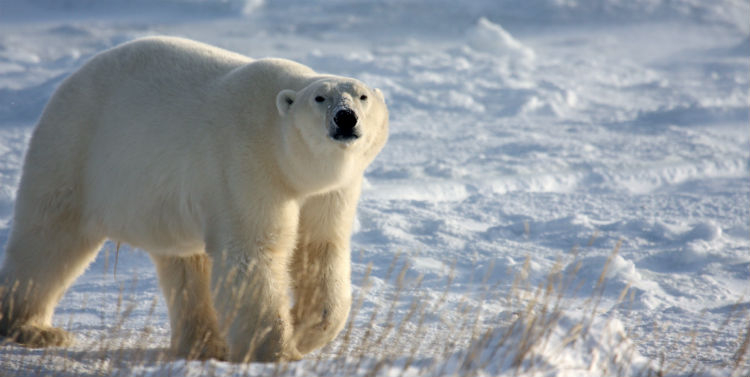 Polar bears are one of Canada’s most fascinating creatures, with roughly 60% of the world’s population living within the country’s borders. And while they share a lot in common with the other bear populations of Canada – there are a few things that make them different. Here are 10 things you didn’t know about polar bears.

1. The Arctic is named after them

The word Arctic comes from the Greek word for ‘bear’, while “Antarctic” means “without bear.” In Inuit mythology, the polar bear is named Nanuk and is called Pihoqahiak, the “ever-wandering one.”

2. They are technically classified as marine animals

While all other bears species are classified as land animals, polar bears are not as they spend so much of their time in or near water.

3. Their skin is actually black

And polar bear fur is technically translucent. It only looks white because it reflects visible light.

4. They are confident swimmers

Thanks to their large paws, polar bears can reach speeds of up to 6mph in the water and swim for days at a time!

5. Their footprints leave behind DNA

Thanks to new technology scientists can trace a specific polar bear from its footprints using just two scoops of snow!

6. They sometimes breed with grizzly bears

7. Male polar bears can weigh as much as 10 grown men

Male polar bears usually weigh up to 545 kilograms and females up to 300. The heaviest recorded polar bear weighed a whopping 2,200 kilograms.

While females retreat to their dens while pregnant and polar bears do migrate (slightly) polar bears don’t have an official hibernation period. More chance of spotting them!

9. They are not left-handed

This is a common misconception, but polar bears use both paws equally.

10. They have snow baths

Matted, dirty, and wet fur is a poor insulator, so polar bears like to have regular baths. In the summer, they spend 15 minutes washing in water and dry themselves by shaking off excess water and rubbing their fur in the snow. In winter, however, they skip the bath and rub their heads in the snow, push forward on their tummies, and roll on their backs.